The Concord Police Department submitted a federal grant application for a BearCat armored law enforcement vehicle, like this one being used in Nashville, Tenn. 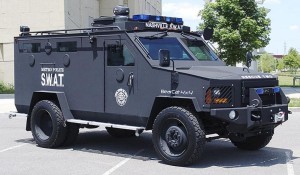 By Kathleen Ronayne
Published in the Concord Monitor on Thursday, January 31, 2014

If Dunbarton Rep. JR Hoell has his way, no New Hampshire community will face the same BearCat controversy that overtook Concord last fall. That’s because, under a bill he’s introduced, towns and cities statewide would be prohibited from having a BearCat or anything like it.

“At the end of the day, we have a law enforcement agency that is more militarized than we intended,” Hoell, a Republican, told a House committee yesterday during a hearing on his bill.

Hoell introduced the bill partly in response to the Concord City Council’s vote to accept a $258,000 federal grant to purchase a BearCat last fall after months of controversy and a petition signed by 1,500 people opposing the vehicle. Opponents’ chief concerns were what they saw as the militarization of the police department and fears that the vehicle would be used against peaceful citizens. (In his application for the vehicle, former police chief John Duval referenced the Free State Project as a dangerous movement, but he later apologized for that comment.)

Concord’s BearCat was supposed to arrive this month, but it has been delayed, and the police department isn’t sure when it will arrive, Lt. Timothy O’Malley said yesterday.

None of the activists who flooded the Concord City Council’s public hearings on the BearCat last year came to yesterday’s hearing. Only Hoell testified in favor of the bill, while Keene’s police chief and a state Department of Safety official testified against it.

Specifically, Hoell’s bill would prohibit state agencies and municipalities from acquiring, purchasing or accepting any military-style equipment, including vehicles and weapons, that aren’t available on an open national commercial market. The National Guard would be exempt from this.

Hoell is introducing the bill because he said he thinks law enforcement is moving in the wrong direction and should focus more on community building than intimidation. He also said money spent on military-style equipment could be used in better ways.

Several members of the House Executive Departments and Administration committee said the bill appeared to take away local control. Rep. Mary Nelson, a Nashua Democrat, asked Hoell what he sees as the appropriate role of the Legislature in telling communities how to spend their money.

“The role of the state, in this case, is to make sure the citizens have the best law enforcement and not one that’s overly militarized,” said Hoell, who added that he is in favor of local control.

Beyond BearCats, Hoell said the bill includes any fully automatic firearms that can’t be bought on the commercial market. In response to a question from Rep. Frank Byron, a Litchfield Republican, Hoell said he’s concerned about combative equipment, not defense equipment, such as bulletproof vests.

But Kenneth Meola, Keene’s police chief, told the committee that bulletproof vests and most police cruisers do not protect officers from rifle fire. Keene acquired a BearCat two years ago. It’s hard to prove the worth of these types of vehicles until a crisis occurs, Meola said, and it’s the responsibility of law enforcement to be prepared for whatever incidents may occur.

Police departments that do have BearCat vehicles or other similar equipment have used them effectively and responsibly, he said, and have clearly defined policies for use.

“I hope that we never have to use them, but in the respect that we’re tasked with providing (public safety) for our communities, we have to be thinking ahead, we have to have game plans . . . for things that we think might happen, and be prepared to respond to them,” Meola said.

He also said Keene’s BearCat hasn’t required any maintenance in two years, and the police department has spent only $185 in gas for the vehicle.

Kevin O’Brien, chief of policy and planning for the Department of Safety, also testified in opposition to the bill, saying the public safety landscape has changed greatly and that getting this type of equipment is a local control issue.

“This would impact state and local control of their own destiny and their own agencies,” he said.

The committee will not vote on the bill for several weeks, then it will go before the House with the committee’s recommendation.
—

Kathleen Ronayne can be reached at 369-3309 or kronayne@cmonitor.com or on Twitter @kronayne

HB 1307 – Title: Prohibiting the state and political subdivisions from acquiring military-equipped vehicles or equipment which are not readily available in an open national commercial market.